Vintage Anderson Headlines Day 2 of County With 7% Increase; Can Hasan Ali Continue To Rise in the Market? 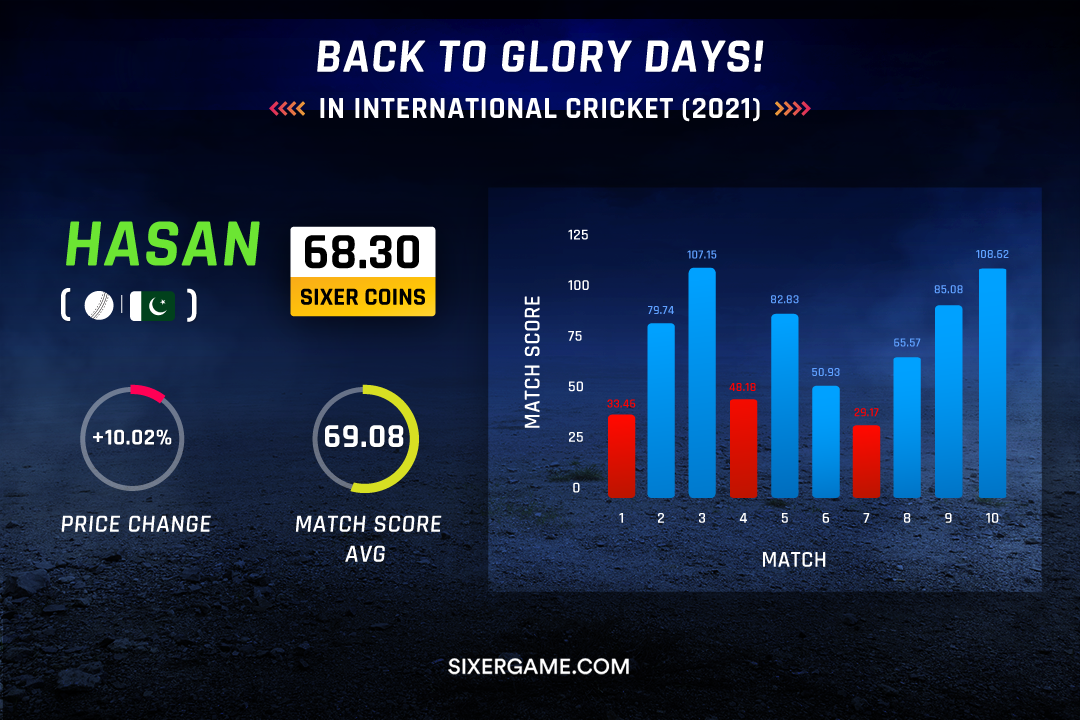 If Day 1 of the ongoing round of County Cricket belonged to the batsmen, the bowlers reigned supreme on Friday with the likes of James Anderson and Ollie Robinson starring with the ball. It was all about Anderson as Lancashire bowled Glamorgan for 344 courtesy of Anderson's three-wicket haul. Although Anderson's 7% increment is quite commendable, Ollie Robinson's fantasy shareholders would be ecstatic with his all-round show as Sussex continues to play catch up to a resilient Northamptonshire side.

Despite Sussex's struggles, Robinson backed his knock of 49 in the first innings with a stupendous five-wicket haul to take his price to 57.60 Sixer Coins per Share, a whopping 12% increase so far. While the likes of Craig Overton and Harry Brook also boast of 50+ match scores and currently top the leaderboard in their respective games, Ollie Robinson's valiant all-round show takes the cake.

It wasn't just about County Cricket on Friday as Pakistan and Zimbabwe locked horns in the second Test in Harare. While Zimbabwe did show glimpses of their potential with the ball, Pakistan opener Abid Ali showed what he is capable of and why he is so highly rated in the first-class circuit with a dominant hundred. He earned a massive increase of 11% increase on Friday alone as he ended the day with a match score of 78.85.

As Pakistan look to extend their total today, our focus shifts towards the Pakistan bowlers, who were on fire in the previous Test. The chief architect of Pakistan's dominant win in the first Test was Hasan Ali, who is hell-bent on rediscovering his glory days of 2017 and 2018. In fact, Ali has come some distance in doing so and may have edged Shaheen as the top dog in the bowling attack. To fully understand the extent of his impressive run in the international circuit, here's some much-needed insight to kickstart your day in the Sixer Market!

Redemption for Hasan as Pacer Averages A Match Score of 69.08 in International Cricket this Year!

Anyone who has been following Hasan Ali over the last few years might suggest that the pacer has underwhelmed compared to his Champions Trophy 2017 days. A series of injuries and a genuine lack of confidence has troubled Hasan Ali, which even led to the pacer being dropped and overlooked for young pacers Mohammad Hasnain and Naseem Shah.

As is the case with any quality bowler, a comeback was on. Hasan Ali grinded it out in the domestic circuit and earned his spot on the national side, and his currently reaping the rewards. Hasan Ali, who is a clean striker with the bat as well, is averaging a match score of nearly 70 in ten international matches since making a comeback, the highest for any player in the Sixer Market during this time period.

He has two ten-wicket hauls in three Tests since making his international return with his white-ball antics also having an impact in Pakistan's series wins over South Africa and Zimbabwe recently. Only on three occasions has Hasan Ali not able to register a 50+ match score with his price increase by a whopping 20% over his last nine games. Outstanding numbers for a bowler, let alone a player returning after a tough time with form and injuries.

As Hasan continues to wow fantasy shareholders in the Sixer Market with his accuracy and incision against Zimbabwe, one must cast an eye towards the future as well and not just the short run. But Hasan looks well-equipped for the future too. With Hasan Ali set to feature in the PSL next month, he is expected to star for Islamabad yet again, as he did before the competition was suspended due to a bubble breach.

Will Hasan Ali add more value to his fantasy stocks is a question whose answer can earn you a fortune in the Sixer Market! With the Pakistani striking a chord with consistency across all formats, Hasan Ali could be a shrewd acquisition before the PSL resumes.