Sixer Scout: With Age and Talent on his Side, is Nissanka the Pick of the SL Lot? 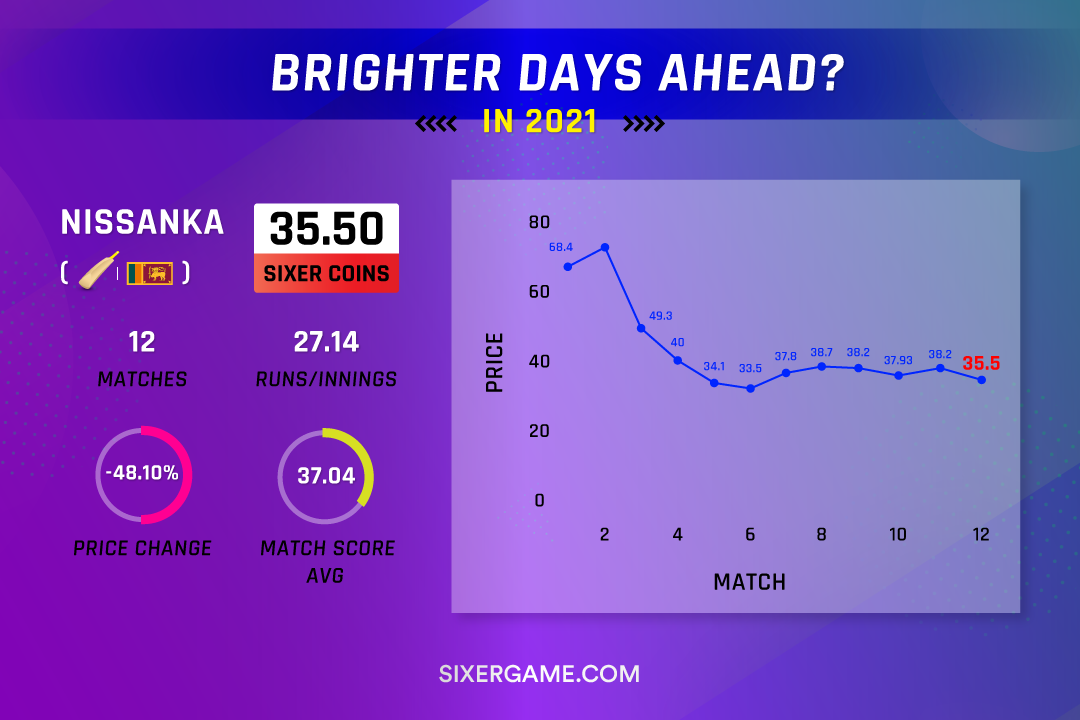 2021 has been an intriguing year but for Sri Lanka, it has been one of redemption and rebuilding. With the 2021 T20 World Cup and the 2023 50-Over World Cup in their sights, the Sri Lankan are building a big pool of talented youngsters to launch a comeback into relevance.

Over the last few years, Sri Lanka has tried and tested multiple captains, multiple youngsters and even coaches. But, they will set for the long haul under the tutelage of Mickey Arthur, who has some success under his belt in the international circuit.

One of first acts upon becoming SL coach was handing out a debut cap to young Pathum Nissanka in not one but all three formats. Arthur even earmarked Nissanka as the mainstay of the SL batting unit for the years to come. However, this isn't something that's new to Sri Lankan fans.

Many have come and gone upon being billed as the next big thing in Sri Lankan cricket. Even guys like Kusal Mendis and current captain Kusal Perera have buckled under pressure despite showing flashes of brilliance. Yet Nissanka looks the part for all its worth.

But what do fantasy shareholders and the SL management see in Nissanka that makes him such a viable asset? As we build towards the final ODI between Sri Lanka and Bangladesh, here's some much-needed insight on Pathum Nissanka and why he could be a shrewd acquisition to your portfolio in the months to come.

Diamond in the Rough - Nissanka Averaging A Match Score of 37.04 in 2021 Despite Strong Start to International Cricket!

Ever since his debut against West Indies earlier in the year, Nissanka has shown that he has a good head on his shoulders. He begun his career with two 50+ match scores in the T20Is although he has failed to back it up with another 50+ match score in the next ten games.

In twelve matches, all formats included, Nissanka has scored only 27 runs per innings although this is the second highest among the Lankan players in 2021. However, his price decreased by 48.10% since his first outing courtesy of a match score average of 35.50.

Despite the lowly match score average, Nissanka is more than just what the numbers tell us. His calm and composed approach makes him a perfect fit for the 50-over and the Test format. But, he has showcased what he is capable of in the T20 format as well with his orthodox shots being used to full effect.

Nissanka is still raw and young and with experience, he will get better and better. Even in the ongoing series against Bangladesh, Nissanka has been elegant on the eye despite not going on to make a big on. His ability to play both pace and spin equally well makes him a fine asset on away tours as well, something Sri Lanka will need in abundance.

As for his fantasy stocks, they are available for a reasonable price of 35.50 Sixer Coins, which might entice a trade. But lack of matches could be a bummer. However, with Sri Lanka playing England in the backend of June, the layoff period shouldn't be too long. With Sri Lanka looking to get the win today and also make a name for themselves against England, young Nissanka remains key as the pick of the lot among the Sri Lankan batsmen!