Sixer Scout: In An Era of Promise and Rebuilding, Is Bracey the Best of the Lot? 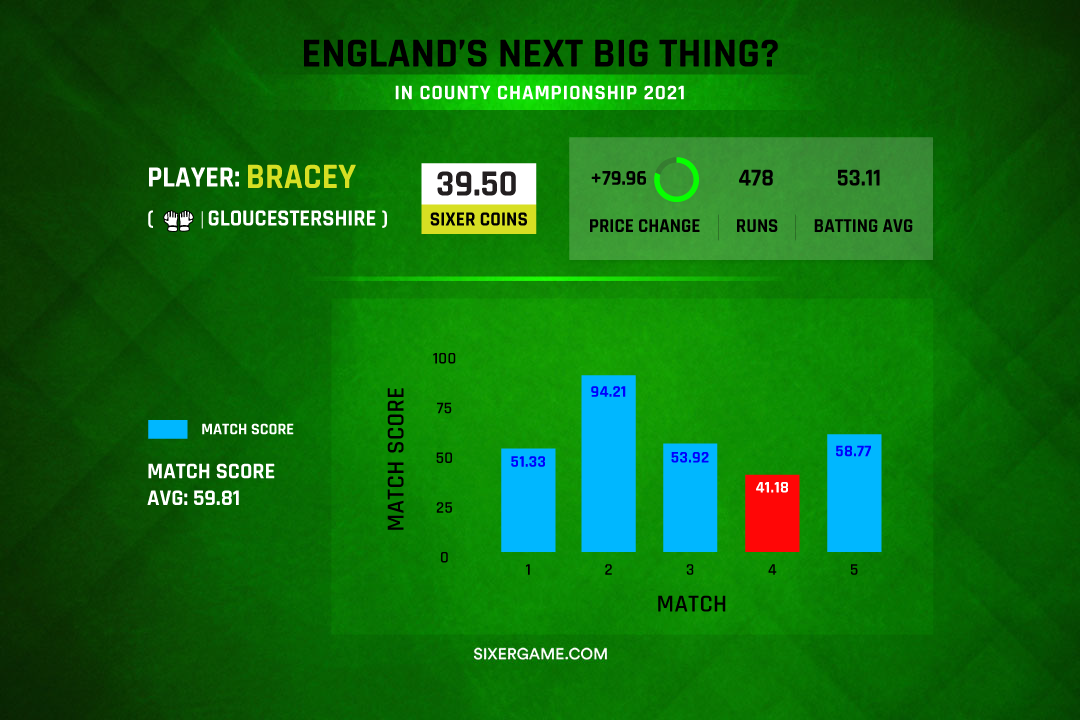 There's no denying England's prowess in world cricket after their ICC World Cup 2019 success. Credit must be given to Andrew Strauss and Eoin Morgan, who has pioneered a change in the English set-up, although there was never a dearth of talent in English cricket. A shift in approach inclining towards a more aggressive and expressive brand of cricket has enabled quite a few youngsters to don the English cap over the years.

Right from Sam Curran to Olly Stone and to the highly-rated duo of Ollie Pope and Tom Banton, the English future looks as bright as any other country in world cricket. However, it isn't quite the case. While Morgan has a fixed and proven template in the white-ball formats, this isn't true of Joe Root and the Test contingency by any means.

With series losses to Australia, New Zealand and India in recent years, England is in a rebuilding phase as it looks to lock in a few key spots in the team. This has seen them hand caps to the likes of Zak Crawley, Daniel Lawrence and Ollie Pope, with all of them yet to really make a mark in this Test arena.

Time for Bracey to Try His Hand in Test Cricket?

While all of Crawley, Lawrence and Pope are consistent performers in the English Test County Championship, there's one other player who is often associated with these names when it comes to the best performers - Gloucestershire keeper James Bracey! Bracey, one of England's best youth prospects, has been a revelation in recent years in the domestic circuit.

His hunger for runs and ability to score big hundreds is precisely what England needs in the top order. Bracey is also a decent player of spin, which holds him in high regards, especially after England's horror show against India earlier in the year. While his temperament does take a back-seat every now and then, young Bracey has the tools to succeed for England.

But all of this is just words on paper for those who aren't aware of Bracey's exploits for Gloucestershire. Combined with the need to identify bargain deals in the Sixer Market, James Bracey becomes one of the more intriguing options on offer. To add more insight into James Bracey's credentials as a future English Test batsman, here's how the Gloucs wicket-keeper has performed in this year's Test County Championship!

Before the start of the season, James Bracey was at an all-time low of 22.50 Sixer Coins per Share despite having a strong County Season last year. His inability to get going in the T20 Blast went against him as his price snooped below the 30-Sixer Coin mark. However, this didn't stop fantasy shareholders from going big on Bracey, a move that has definitely delivered big time.

Fast forward to today, Bracey is up by 79.96% in just five games with four fifty-plus match scores to his hame. He is among the top run-scorers in the competition with 478 runs and a batting average in excess of 50 as well. And the best of this is that Bracey hasn't even showcased what he is "truly" capable of in this format!

His match score average this season is just 59.81, which leaves enough room for improvement. Having said this, Bracey's inability to convert cameos into big ones this season has been a chink in his armour, something that he will look to address in the coming days.

Now one might think that Bracey is still finding his feet in terms of scoring big runs; it might just be a matter of a few balls that he regains his sublime touch and goes on to add more runs to his already impressive tally of 478 runs. If he does go on to have a breakout year, Bracey's price could soar past the 60-Sixer Coin mark from where it is at the moment at 39.50 Sixer Coins per Share!

With Bracey in decent touch and England playing a number of series over the next two years, they might ponder fielding a whole second-string squad for a few of them, which brings in the prospect of Ollie Robinson, Craig Overton and of course, James Bracey to don the English cap. If this does happen, English cricket will have taken a step towards realising what a fantastic talent they have on their hands in James Robert Bracey!