Returning Archer Scorchers Crawley and Co in Start-Stop Day; Is Pope the Answer to England's Concerns Ahead of the Ashes? 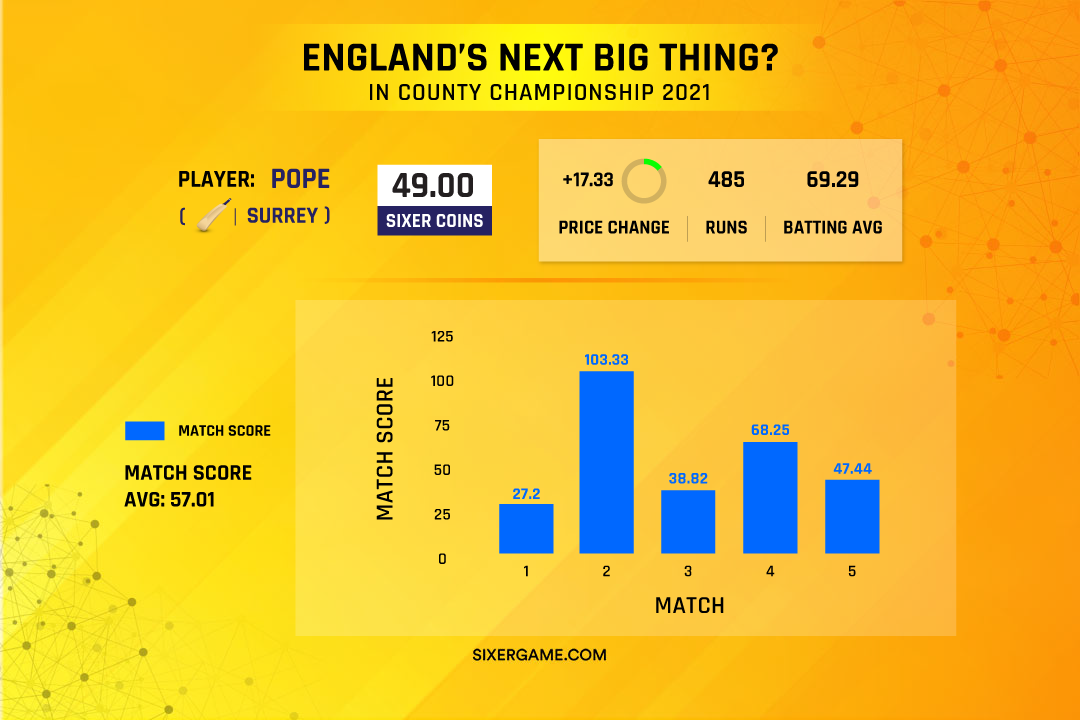 The dreaded English weather had the last laugh yet again, but not even rain could stop three out of the six games to enthral Sixer fantasy shareholders. While the big game of the day, Yorkshire taking on Glamorgan, didn't kick-off, no thanks to the rain, the big news that came out of Thursday was the return of Jofra Archer from injury. The Barbados-born pacer hogged all the limelight with two big wickets to kickstart the proceedings as he finished the day with a match score of 58.34, But it was yet again the ever-consistent Ollie Robinson, who starred with a match score of 73.39 and a price increase of 5% on Thursday alone. Their opponents, Kent, were able to put on 145 on the board, with Zak Crawley and Daniel Bell-Drummond unable to get some runs under their belts. Sussex is well-set up for a big lead and potentially a big win, which makes this game all the more interesting heading into the second day's play.

In the other games, Brydon Carse topped the leaderboard as Durham managed to put on a total of 246 against Worcestershire. Carse, despite not being well-known for his batting prowess, came up with a 112-ball 38 to drag Durham's total over the 200-run mark. As for the third and final game on Day 1, Middlesex's Peter Handscomb failed to get a run to his name as his side struggles at 90 for 4 at the time of writing. They will need a herculean effort for their middle order to get them out of this rut, especially against a batting unit that boasts of Sam Northeast and James Vince in it.

While many fantasy shareholders were itching to see Joe Root and Marnus Labuschagne square off in this round of fixtures, there was another game, Surrey taking on Somerset, that was much-awaited for among the Sixer community. With some of the best youngsters in Tom Lammonby and Jamie Overton in the scheme of things, there was an opportunity or two on the trading front as well. As the wait goes on, we cast our eye over one of England's brightest prospects in this format - Ollie Pope. Let's dive into it, shall we?

Is Pope the Next Big Thing for England? Trading at 49.00 Sixer Coins!

Not many have the talent to first break into the English set-up at the age of 21, which is why Ollie Pope is a prodigious talent. Although his initial stint as a Test cricketer didn't go as planned, he didn't let that deter him. Pope grinded it out in the domestic circuit and regained his place following Bairstow and Denly's poor run of form for England, and boy has he delivered for them.

Ollie Pope, who is capable of batting at number three as well, has predominantly played at four or five over the last year or so. Although he averages just 31 in his 17-Game Test career, the impact of his knocks has been profound. His performances in last year's series against Pakistan were quite highly regarded although his poor returns in the following series haven't been too great.

Nevertheless, Pope is at it again in this year's English Test County Championship for Surrey as he seeks to seal his spot in the English middle-order. Not many can boast of a better record, with Pope accounting for 485 runs at an average of 69.29. As a result, his price has increased by 17.33%, the highest for any Surrey player this season. What's more interesting is the consistency that he has shown this season. He averages a match score of 57.01 with a couple of fifties to his name as well, holding him in good stead.

But has he done enough to seal his spot? England boasts of a compact batting unit that has the likes of Root and Stokes potentially in their prime. But the need to nurture young talent is an issue, which is why the likes of Ollie Pope and Zak Crawley are so important in the larger scheme of things. Pope, who is similar to Steve Smith in the way he approaches the game, is a decent white-ball cricketer, too, adding more value to his fantasy stocks come next month. He is available for just 49.00 Sixer Coins per Share, making him one of the most viable options. But can he deliver on his talent and promise? Only time will tell!