County Chartbusters Harmer and Bedingham Among New Additions to the Sixer Market! 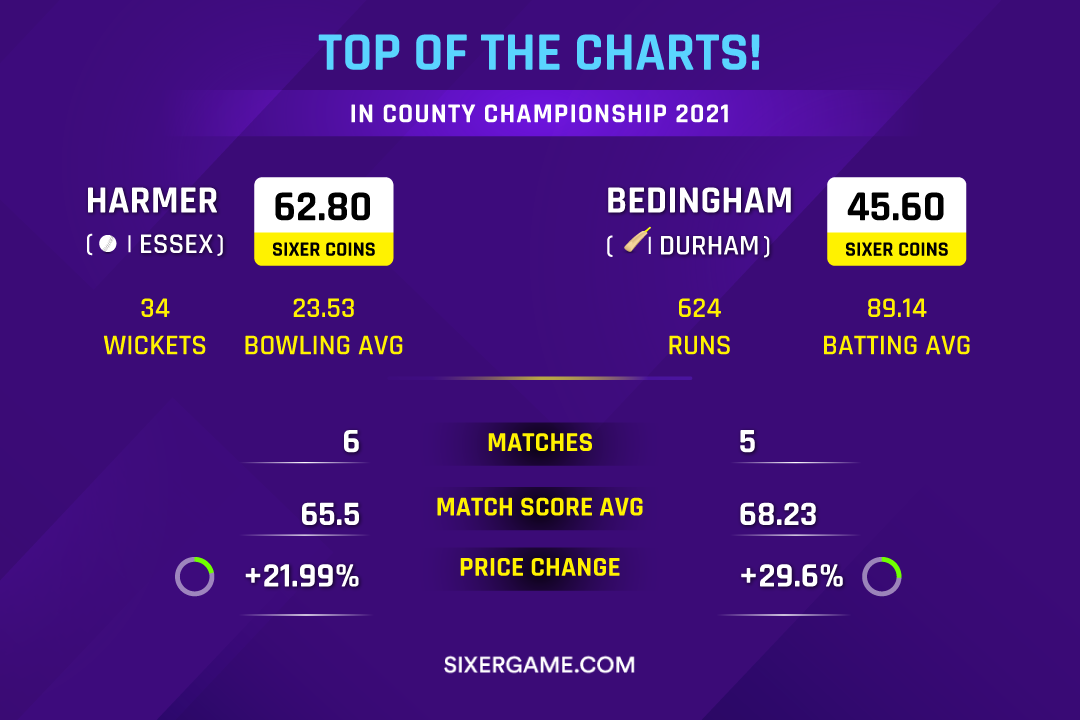 Cricket is returning to normalcy, with cricket in England giving all fantasy shareholders a chance to build their portfolios. This is precisely why as many as 55 players were added to the Sixer Player roster, including Glenn Phillips, Dhananjaya de Silva and Fidel Edwards, who recently made a comeback to the West Indies set-up after a stint with Hampshire in the County Championship.

Speaking of the County Championship, the additions also include this season's best performers, such as Kiran Carlson and Kyle Abbott. But the standout additions this time around are undoubtedly David Bedingham (Durham) and Simon Harmer (Essex).

While Simon Harmer has been a revelation in recent years, with his current standing as the top wicket-taker not coming as a big surprise, this isn't the case with David Bedingham, whose sensational chart-topping form has seen him become a household name this season. With Harmer and Bedingham available for 62.80 Sixer Coins and 45.60 Sixer Coins, an insight is required on their recent form. Without further ado, here's your daily dose of Sixer Insight.

Simon Harmer's numbers speak for themselves. Essex, who have won the competition both in 2019 and 2020, have had Harmer to thank for his extraordinary bowling performances. He has topped the bowling charts on both occasions and is currently repeating the trick with 34 wickets in just six matches.

Harmer averages a match score of nearly 60, leading to a price increase of 22%, which holds him in good stead. Although his match score average or his bowling average of 23 isn't as impressive as that of Overton or Robinson, Harmer does the trick as Essex's top dog. With Harmer set to feature heavily in the white-ball formats as well, 62.80 Sixer Coins per Share might not be a bad deal for Harmer's fantasy shares.

Surprise Package Bedingham Averaging 89 With the Bat for Durham!

While Simon Harmer has been one of the top performers in recent years, making his chart-busting performances are not quite eye-catching, David Bedingham's rise in the Durham colours has been sensational.

Bedingham has 624 runs at the time of writing with a match score average of 68.23. His ability against both pace and spin has been exceptional, holding him in good stead. In fact, Bedingham's 257 against Derbyshire is still the highest score in this year's competition, which earned him a match score of 123.71.

His price has increased by 29.6%, the third-highest among batsmen behind James Bracey and Rory Burns. With his price trading at a reasonable price of 44.80 Sixer Coins per Share, David Bedingham is sure to be one of the trending stocks in the Sixer Market.

But, it isn't just about Harmer and Bedingham in the Sixer Market! New additions such as Kyle Abbott, Pathum Nissanka and Gary Ballance are also more than capable of setting the Market on fire. Who are you going to buy in the Sixer Market ahead of an extended English season? Stay tuned to this space for more such insights.