County Bulls & Bears of the Week: Root's Stock Continues To Barrell Down as Cooke Announces Himself With 16% Increase! 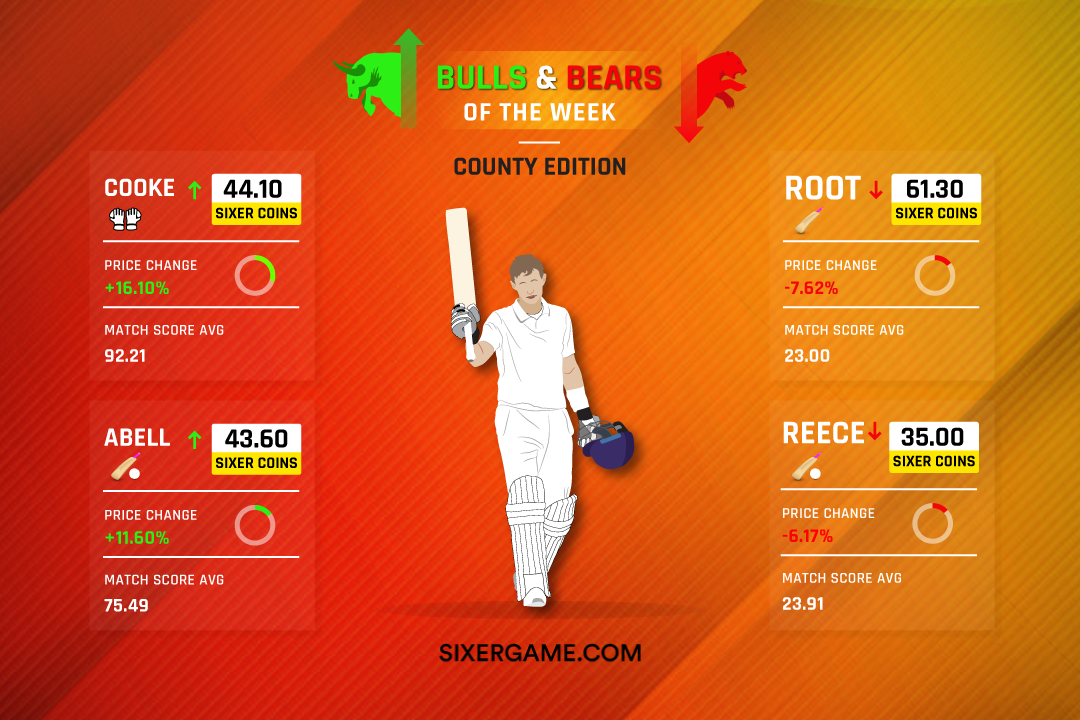 It's barely been a month since the start of the English County Championship, but the action has unravelled at a rate of knots. Right from James Bracey's stunning 65% increase from Matthew Critchley's all-round show earlier in the month, Sixer fantasy shareholders have reaped the rewards of keen research and knowledge of the game. But for those who would love a head-start going into the next round of English County Championship matches, we've got your back. Walking along the same lines, here are the Bulls and Bears of the previous County round to help you get going in the Sixer Market!

Chris Cooke is the first name on this week's Bulls and Bears with a match score of 92 in the previous round. However, it is his sensational increase of nearly 16% which takes the cherry on top. Against a decent Northamptonshire team, Cooke smashed a century in the first innings and backed it up with a fifty in the second. With this kind of form, one might be tempted to add him in to the portfolio and why not? Cooke is available for a modest price of 44.10 Sixer Coins per Share, which might entice a few trades. But can he keep up his form? Only time will tell

It hasn't been the ideal County campaign for Joe Root, who is already down by over 20%. Root had another woeful outing in the previous game against Sussex with a match score of just 23. He failed to get going in the middle order, which does seem to be a concern for Yorkshire at the moment. However, given the talent and experience he possesses, Root should be a viable asset in the Sixer Market. Priced at 61.30 Sixer Coins per Share, Root is available for a 10-Match low, which might be an elusive deal considering the upside that comes with Root and his fantasy shares.

Back to the Bears, Tom Abell is quickly becoming one of the top-rated players in the country and rightly so. The Somerset captained turned up a match score of 75, leading to a price increase of nearly 11%. Against a competent Middlesex bowling attack, Abell mixed caution with aggression to perfection as he notched up over 100 runs in the game. Like Chris Cooke, Tom Abell is also priced at a reasonable 43.60 Sixer Coins per Share, which might actually lure a few fantasy shareholders. So add him up before it's too late!

Last but not least is Luis Reece, who was one of the stars of the tournament last time around. Reece had a horrible time in the previous round with a match score of just 23.91, despite being billed as a genuine all-rounder. However, this price drop of 6% should open an opportunity for a trade in the Real Market with Reece available for just 35 Sixer Coins per Share! Able with the ball and capable at the top of the batting order, Reece is a decent option to have in your portfolio. Add him up before it's too late as the English County Championship begins to indeed unfold in the Market!