County Bulls & Bears of the Week: Raine Pips Overton As the Top Bull as Vince Falls To Five-Match Low! 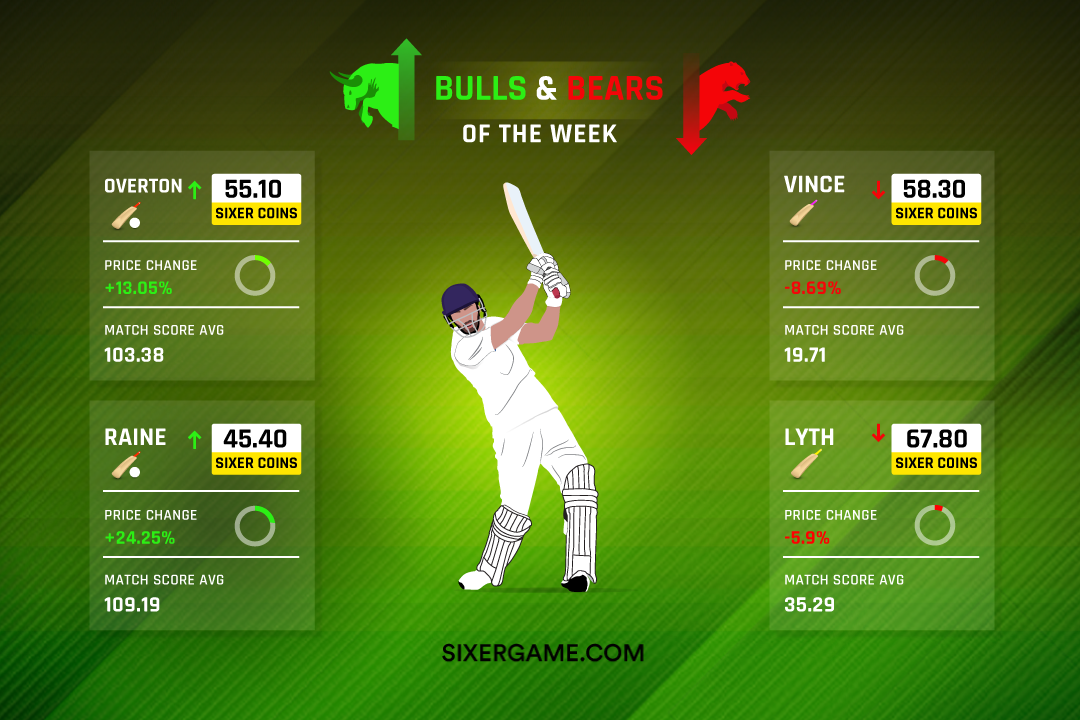 With the IPL 2021, unfortunately, being rescheduled, fantasy shareholders are on the lookout for viable options in the mould of Virat Kohli and Steve Smith, worth investing in. Although the IPL is unparalleled in its quality and star power, the English County Championship isn't far off! The premier four-day tournament is back today with all eyes on the likes of Joe Root, Stuart Broad and young Tom Banton, to name a few. Not to mention, overseas stars Marnus Labuschagne and Hanuma Vihari are also in action for Glamorgan and Warwickshire today. But for those who wish to know more about the top and not so top performers, you're at the right place! Without further ado, here are the Bulls and Bears of the Week ft County Championship.

An eight-wicket haul and a vital cameo with the bat - Craig Overton had a field day against Middlesex in Taunton as he achieved his first 100+ match score of the season. After electing to bowl first, Tom Abell turned to his star bowler, Craig Overton, to do his thing and boy did he deliver. He leads the way with some superb bowling, even accounting for five wickets in the second innings to set up a successful run-chase for the Somerset batsmen. As a result, Overton saw an increase of about 13%, earning him the mantle of Bull in the Market! Somerset is back in action this week against Hampshire, against whom they will need Overton to fire big again! If you think he can, 55.10 Sixer Coins is all it takes to add him to your portfolio!

Craig Overton and his Somerset teammates have been brilliant this season, but they come across James Vince and Hampshire this week. However, it hasn't been an ideal season so far for James Vince, whose price is now trading at a five-match low of 58.30 Sixer Coins per Share. He actually started the season off with a double-hundred and the first 100+ match score of the season. But since then, Vince has succumbed to some quality bowling, although he is well and truly capable of turning out around quickly. He comes into this round with a match score of 19.71, something that wouldn't have pleased his fantasy shareholders. But again, Test cricket is all about technique and composure, which Vince has shown time and time again. But can he pull off another good performance against hot favourites Somerset? Your analysis is as good as ours!

While they talk about the biggest Bull of the Market continues, one name that stands out is Ben Raine! The Durham all-rounder was on fire in the previous round with a match score of 109.19, resulting in a price increase of 24%! Along with Mark Wood, Raine skittled Warwickshire to a paltry total of 87 in the first innings. And to add value to Raine's performance, his spell of 5 for 9 included wickets of Sam Hain and Indian international Hanuma Vihari, who aren't your average players by any means. This performance earned him a massive increase, although his price currently reads 45.40 Sixer Coins per Share, something that a few fantasy shareholders will keep tabs on. While Raine isn't in action this week, there is certainly no harm in adding Raine's stocks, which are bound to be in high demand, to your Sixer portfolio as he gears up for another potentially match-winning performance in a week's time!

Last but not least comes Adam Lyth, whose name might surprise a few in this list as a Bear! But it is what it is! Lyth, who is the second-highest run-scorer with over 500 runs to his name, suffered twins failures against Northamptonshire last week, leading to a match score of just 35. As a result, Lyth's fantasy price has dropped by 7% to 67.80 Sixer Coins per Share, leaving ample room for another big increase. He faces Kent today at the Headingley Oval, a ground where he has enjoyed some success in recent years. Not to mention, Lyth scored a hundred against Kent earlier in the season and will fancy another big knock against the likes of Zak Crawley and Joe Denly. But can he come good against them? Only time will tell!