County Bulls & Bears of the Week: Lawrence Sets the Market On Fire With 17% While Willey, Marnus Disappoint! 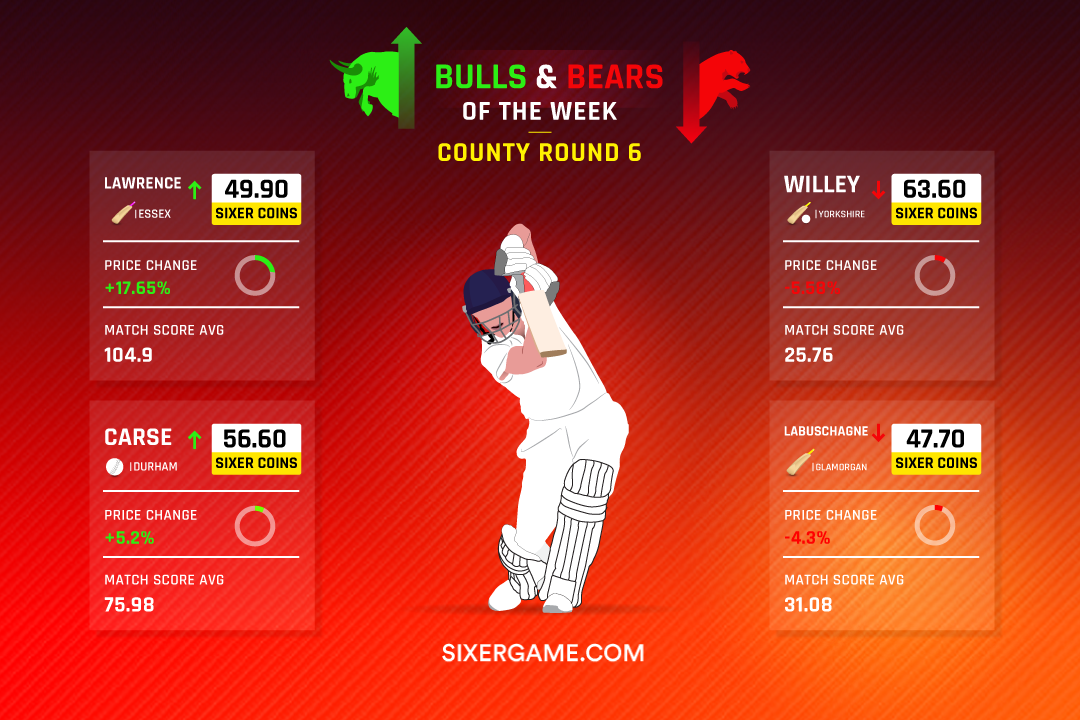 This week's round of fixtures in the County Championship has a different vibe than the others. As we build-up to the first game of the week between Hampshire and Middlesex, news of a potential Test cap for Ollie Robinson and James Bracey sprung as they made the 15-man squad set to take on New Zealand next month. While this may come as a rude awakening for a few, it may also spur them on towards a better performance, opening up different scenarios in what is a crucial week for both the counties and the Sixer fantasy shareholders.

As we await the start of the first game in this round, it has to be said that rain could play a part in the coming weeks. But such has been the resilience and quality of performances on display that players have ensured they stay relevant in the Market while handing their sides a shot at a win. But this hasn't been the case with a few players, which is quite natural even without rain. As is the norm, we look at the best and worst players in the previous round in our latest's edition of the County Bulls and Bears of the Week! HERE.WE.GO!

Leading up to the game against Derbyshire, Essex were under some pressure. They had lost by an innings and 20 runs against Nottinghamshire in the previous round and couldn't afford a loss to Derbyshire as they look to three-peat in the English Test County Championship this year. However, the prospect of rain interrupting play frequently and the quality of the Derbyshire bowling attack posed a different threat, which was nullified by a sensational knock by Daniel Lawrence. Lawrence smashed a brilliant 152 off just 133 balls, including 16 fours and 6 sixes. This ensured Essex got to a mammoth total of 412 for 3 in just 76 overs, which is quite remarkable given the conditions. This performance earned Lawrence a match score of 104.9 and a price increase of 17.65%, both being the highest for any player in Round 6. He even picked a wicket in the second innings, which only added value to his stock price, which currently reads 49.90 Sixer Coins. After three sub-50 match scores on the trot, Lawrence sensational knock has brought him back into the gains and possibly into the English set-up as well. With the likes of Ben Stokes and Jos Buttler being rested for the two-match series against NZ, Lawrence could well feature in the English middle-order, making him a viable long-term option.

While the rain did bring out the best in Lawrence as he upped the tempo, cloudy conditions were also seen in the game between Yorkshire and Glamorgan in Wales. However, England all-rounder David Willey couldn't make use of the pace-bowling friendly conditions as he could only muster a match score of 25.76. He only bowled 14.5 overs in the entire game with combined figures of 1 for 70. His only wicket was that of Michael Hogan, who bats at number 11 for Glamorgan. While Glamorgan's batting unit couldn't come up with a solid response after being asked to bat first, Yorkshire also stumbled and could have conceded a deficit if not for Joe Root's 99. But he could have been helped on by David Willey, who only scored three runs before getting out to a brilliant ball from Dan Douthwaite. Nevertheless, his bowling had already resulted in a sizeable decrement (5.58%), taking his fantasy price to 63.60 Sixer Coins! Willey's price is down by 11% in his last four games, courtesy despite turning out two 50+ match score performances. With a match score average being around the fifty mark, Willey could well be in for a profitable spell in the coming days, given the onset of the white-ball tournaments very soon.

Moving on to the Bulls again, we have a surprising name, well, to some fantasy shareholders, to feature in this list in Brydon Carse. For all of you, who aren't aware of Carse, he is a promising bowling all-rounder who is a mainstay of the Durham set-up in all three formats, and he has shown exactly why he is so highly rated in the last few weeks. Although Carse started the season off with a poor match score of 23.48, he has turned out match scores of 73.42, 87.90, and the latest one being 75.98. As a result, his price has increased by 16.44% this season, although there's more to his sensational increase. In the previous round against Worcestershire, Durham struggled initially, with the score reading 136 for 6. But Carse came up with a patient knock of 38 runs, which took Durham's total over the 200-mark. This ultimately proved to be the difference as Worcestershire couldn't take the lead, courtesy of our man Carse picking two wickets for 47 runs. This paved the way for a Durham counter-attack, which they did to perfection as they set a mammoth target of 423. This proved to a step too far for the Worcs as Carse picked up two more wickets to add more value to his case. With Carse and Durham taking on Derbyshire in this week's round of fixtures, a side that is struggling for form, he could well be in for another profitable performance with both bat and ball in the battle for a top-two finish in Group 1.

The English squad wasn't the only one to be announced during the week. We also had their rivals, Australia, announce a preliminary squad for the white-ball series over in the Caribbean. However, this didn't include Marnus Labuschagne, who has been one of their better players in the ODI format in the last year or so. In fact, his game in the shortest format has also improved in leaps and bounds, with the South African-born batting-allrounders peaking at 71.50 Sixer Coins during BBL 2020-21. But it hasn't been plain sailing for Labuschagne in this year's County Championship with match scores of 28.36. 24.55 and 31.08, the latest of which came against Yorkshire in the previous round. Labuschagne, who was returning to Wales for the first time in two years, underwhelmed with scores of 10 and 0 against Thompson, Coad and co. He didn't have a say with the ball as well, although he bowled only three overs, given the rain interruptions and the cloudy conditions on offer. This resulted in a 4.3% decrease in his fantasy price that reads 47.70 Sixer Coins per Share, the lowest it has been since the Boxing Day Test against India last year. However, if that were to be considered as a coincidence, Marnus is in for a turnaround, and with the snub, which has been blamed on the COVID restrictions at this point in time, he could be spurred on to show what he is truly capable of in this format. Glamorgan and Labuschagne face Kent in the latest round of fixtures, which could be a good opportunity for the Aussie to showcase his prowess against the likes of Stevens and Miguel Cummins in what should be a cracker of a game at the St Lawrence Ground in Canterbury.