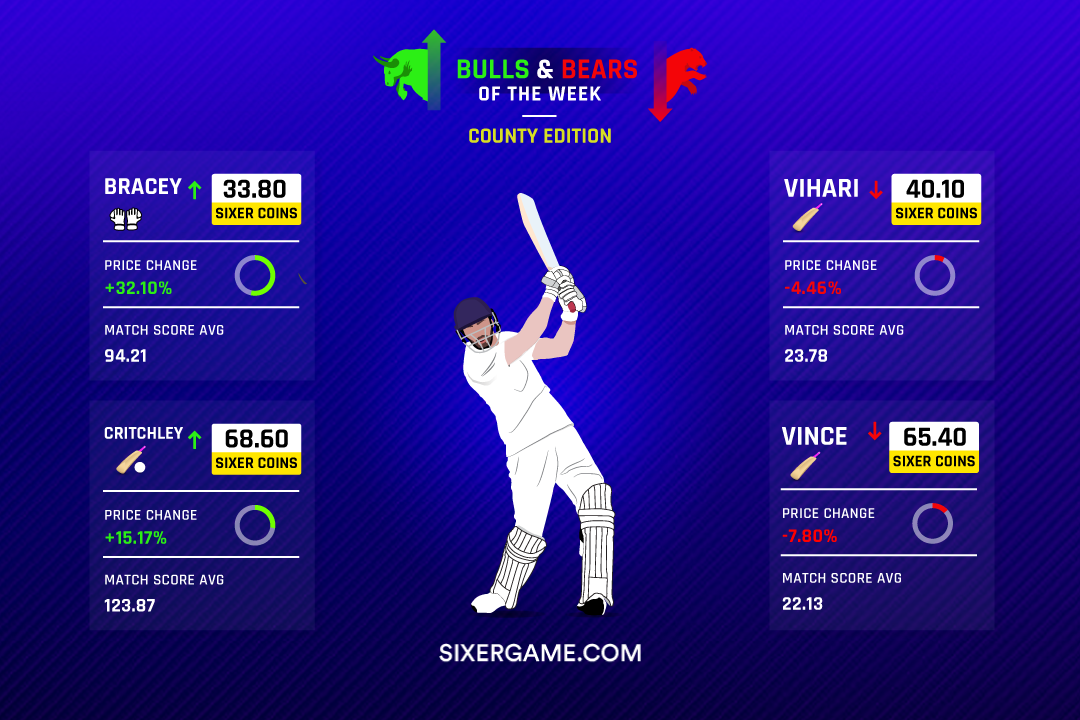 What a week we have in store in the Sixer Market! While the IPL frenzy seems to be slowing down, given the intensity increasing with each passing game. While there's considerable demand for Pooran and Morgan, both of whom are available for less than 35 Sixer Coins, you may or may not get them in your portfolio in the nick of time. However, there's more to the Market than just the IPL. Several eye-catching deals are available in the English County Circuit, which calls for a deeper understanding of the Market. But before we dive into the thick of things today, here are the Bulls & Bears of the previous County Championship round!

Who else but James Bracey? Before the English Test County Championship, Bracey is available for a paltry 25.40 Sixer Coins and was the lowest priced stock of them all. Fast forward to today, Bracey is up 52% and is priced at 33.80 Sixer Coins per Share! The English wicket-keeper had an outing to remember in the previous round as he notched up a match score of 94.21. Although he would have loved to score a hundred, Bracey's increment over the last two weeks is a promising sign. There's definitely more room for improvement and an increase with Bracey in the Real Market, and if you think he can replicate the same form against Hampshire, you better grab him up quickly!

While Bracey will have his task cut out against Abbas and Abbott against Hampshire, there's one more Hampshire star who Bracey and co would love to get rid of early in the innings. James Vince has had a great year so far with a career-defining BBL stint with the Sydney Sixers. As England searches for backup options ahead of a hectic Test season, Vince started his quest for a national team spot with a double-hundred in the opening round. However, Vince underwhelmed against Middlesex the following week with a match score of just 22.13. This resulted in a 7.80% decrease, which his fantasy shareholders hope he recovers during this week. At 65.40 Sixer Coins per Share, Vince presents a decent case for a trade, and if he were to get back into the runs, his fantasy shareholders are in for another good outing!

Another relative unknown in the Market, Matthew Critchley, is a talented all-rounder who can change the course of a game in a matter of overs. That is precisely what he did in his previous outing against Worcestershire. Critchley scored a combined tally of 193 runs and picked eight wickets in a performance that will ideally go down in the Sixer record books. It is, in fact, the highest match score in a Test match since Pat Cummins' sensational MCG performance in 2018-19. This performance helped Critchley's fantasy shareholders gain by 15.17%, taking his fantasy stock price to 68.60 Sixer Coins per Share! And for those who wish to swoop in on him, he gets to play Durham today at Chester-le-Street, where spinners have extracted some turn off the surface. But the question is whether he can come up with another stellar performance? Only time will tell!

Well, there wasn't much hype surrounding this, but Hanuma Vihari became the first Indian to play in the County Championship this year, although things didn't go as planned for him. Vihari, who turned out for Warwickshire last week, had a tough debut as he was dismissed cheaply in both innings by the Notts bowlers. He could only muster a match score of 23.78, resulting in a 4.46% drop in his fantasy price. But, Vihari gets another go at an increase in the Market against Essex, the current County Champions. It should not deter Vihari with potential fantasy shareholders will ideally keeping a close eye on him with his fantasy stocks priced at 40.10 Sixer Coins per Share! Can he come up with the goods against the best team in the country? This is a question whose answer might earn you some big bucks in the Real Market!