Bulls & Bears of the Week: Jadeja Lights Up the Market as ABD Drops By 17% 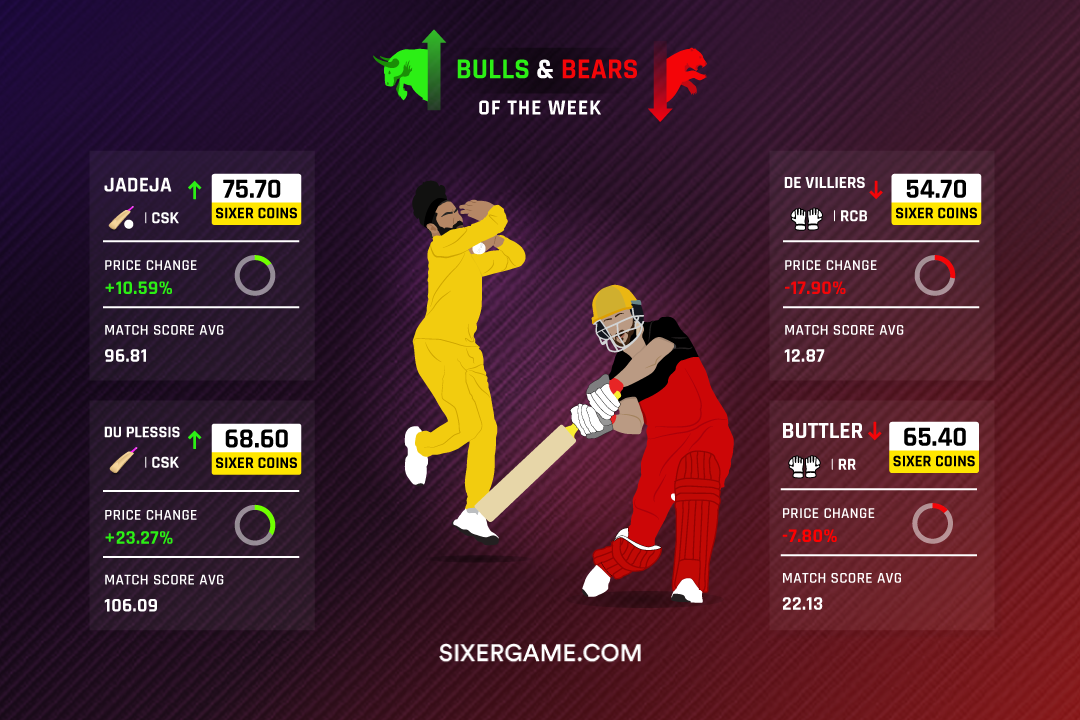 The Sixer Market saw its fair share of action courtesy of the Indian Premier League. We had our first centurion of IPL 2021 in Devdutt Padikkal, our first Super Over courtesy of Sunrisers Hyderabad and Delhi Capitals and last but not least, Ravindra Jadeja's virtuoso performance against Royal Challengers Bangalore. However, only a few can make the cut on the list, giving you an in-depth analysis of their performances. So without further ado, here are your Bulls & Bears for the Week!

Not many can influence the game with bat, ball and with their fielding like Ravindra Jadeja. If anyone wrote him off given his recent injury, the CSK all-rounder's recent blitz against Royal Challengers Bangalore should have answered their questions. Jadeja was at his belligerent best with a 28-ball 62, which included him scoring 36 runs off Harshal Patel. But that wasn't all! Jadeja turned on the heat with the ball with figures of 3 for 13, including a wicket-maiden. And to top of it off, he even nailed a run-out to cap off perhaps the greatest ever performance since Chris Gayle's blitzkrieg against Pune Warriors India in 2013. As a result, Ravindra Jadeja's stock price rose to 75.70 Sixer Coins, the highest for any CSK player. With Chennai set to play a few games in Delhi, this might not be the end of Jadeja and his pyrotechnics in the IPL and in the Sixer Market!

Over to the Bears, we have Jos Buttler, who hasn't fired for Rajasthan Royals this season. In fact, he failed to get going in both his games during the week as he succumbed to quality swing bowling on both occasions. With a match score average of just 22.13, Buttler's price dropped by 7% to 46 Sixer Coins per Share! Although Buttler couldn't take care of business at the Wankhede, he will be keen to get back to form in Delhi, where they play three games. Also, he plays two games against Mumbai Indians, against whom he averages in excess of 40 at the top of the order. But with both Jasprit Bumrah and Trent Boult capable of toppling any batsman in the powerplay, Buttler's fantasy shareholders are in for an exciting time in the Market!

Although Ravindra Jadeja grabbed all the headlines in the IPL at the end of the week, Faf du Plessis was the unprecedented Bull of the Sixer Market. Faf came up with two fifties during the week, earning him a price increase of 23%. His match score average of 106 was second to only Devdutt Padikkal although the impact of the South African's knocks wasn't second to anyone. The veteran has taken up the anchor's role in the CSK batting unit and is acing it. At 63.60 Sixer Coins per Share, Faf du Plessis has some room for improvement or an increment in the Sixer Market, making him a highly sought-after asset in the Real Market. But can he continue his fine form at the top of the order? Only time will tell!

While Faf du Plessis had a blast during the week, it wasn't the same for his former international colleague AB de Villiers. The RCB wicket-keeper could only mister a match score average of 12.87, leading to a 17% price drop in the Sixer Market! Although he didn't get to bat against Rajasthan, AB de Villiers was undone by Ravindra Jadeja in what was a tough outing for him. However, AB de Villiers will look to set the record straight in the Sixer Market with a fine performance today. He faces Delhi Capitals, a team he has had considerable success against in recent years. But will he come up with the goods against Rabada and co? If you think so, AB de Villiers at 54.70 Sixer Coins could well be a shrewd acquisition!