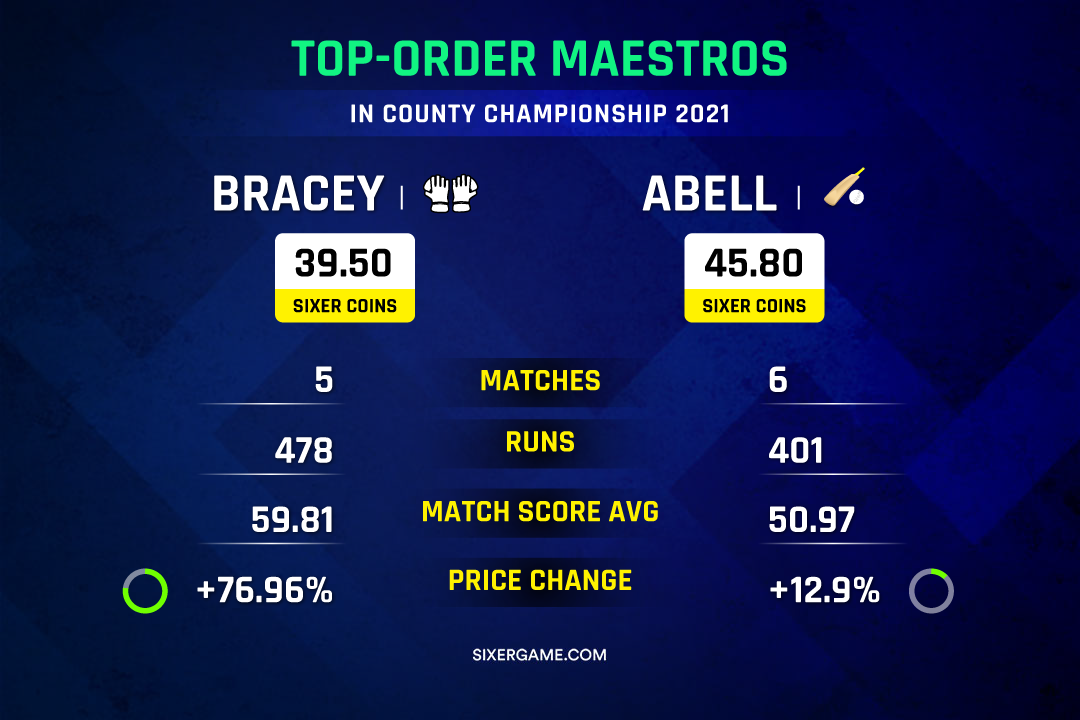 Rain continues to frustrate fantasy shareholders in the Sixer Market as Hampshire's first innings was interrupted after 26.2 overs after recovering from an early wicket. With the score reading 53 for 1 with the likes of Sam Northeast and James Vince in the hut, Hampshire will be looking to grab the initiative against a weakened Leicestershire side sans the services of Callum Parkinson.

But fantasy shareholders need not wait for just one game with as many as six matches kicking off in the County Championship 2021 today. While the likes of Lancashire and Warwickshire return after a fortnight, all eyes are firmly on the marquee clash between Gloucestershire and Somerset as they battle for the top spot in Group 2.

While the war between Gloucestershire and Somerset will be the most-awaited game of the week, the battle within the war between two of the best young batsmen in James Bracey and Tom Abell is one to watch out for. Both individuals have played a pivotal role in their respective side's strong so far, with Bracey even earning an English call-up earlier in the week.

As we build up to the all-important clash of the week, and insight on both how the Gloucestershire and Somerset batting units have fared with Bracey and Abell, respectively, at the helm is in order. Without further ado, here's your daily dose of Sixer Insight to kickstart your day in the Market!

Bracey and Abell Among Select Few To Score 400+ Runs and Average A Match Score Over 50 this County Season!

While Somerset is one of the heavyweights in the competition, they are on a mission to finally go the distance after finishing second-best to Essex in the final of the previous two editions. This year, Somerset is well-placed in the points table despite the likes of Tom Banton and Tom Lammonby failing with the bat.

While credit has largely been given to Craig Overton and Lewis Gregory, who have accounted for more than 50 wickets this season, Somerset captain Tom Abell has been the standout batsman for them. With his attacking brand of cricket, Abell has been sidelined for some time as a white-ball specialist, but the reality isn't even close.

Abell has 401 runs in six games with a batting average of nearly 40, which is the highest for any Somerset player this season. Although Abell has only three 50+ match scores this season, they have come at the most crucial times for Somerset. In fact, his combined tally of 123 runs and figures of 1/26 against Leicestershire last month was one of the standout performances this season. With a match score average of 50.97 and the fact that Abell is a more accomplished white-ball cricketer, his current fantasy price might be a bargain at 45.80 Sixer Coins!

Job Not Done For England's Next Big Star In the County Championship!

Abell's counterpart, James Bracey, has been one of the main reasons for Gloucestershire's stunning rise to the top of the table. In just five games, Bracey has 478 runs with a match score average of 59.81. To give you an idea of how pivotal he has been to Gloucestershire's fortunes, Bracey's price is up by nearly 77%, the highest for any fantasy players in 2021 and he isn't done just yet.

Bracey's ability to settle down and score big runs under pressure makes him a valuable asset to any team. It is such rigour that is currently missing in the England Test squad with the likes of Daniel Lawrence and Ollie Pope still on the learning curve. Although Bracey is no veteran, his numbers speak for himself.

Left-handed Bracey also adds a dimension with his solid keeping, with Ben Foakes set to face some competition for his spot come June. But before the series against New Zealand, Bracey cannot let his guard down against Somerset this week in the battle for the top spot.

He will be critical against the incisive swing bowling of Craig Overton, who leads the pacers for most wickets this season with 32. If he were to negate the threat of Overton and Gregory, Gloucestershire would have won half the battle in what should be a tough test for them. But given the form that Abell is in, their bowlers are also in for a tough time.